LaunchGate makes it easy to let users know when an update to your app is available.

You can also block access to the app for older versions, which is useful in the event of a severe bug or security issue that requires users to update the app.

Additionally, you can use LaunchGate to display a remotely configured message to users at launch which can also be used to temporarily block access to the app (i.e. during back-end maintenance).

You’re in luck! LaunchGate was built in parallel with its Android counterpart, Gandalf.

LaunchGate is available through CocoaPods. To install it, simply add the following line to your Podfile:

By default, LaunchGate expects a configuration file that looks something like this:

If you want to use a different configuration structure than the default, you can! See the section below, for instructions on how to provide a custom parser.

or if you have a Application Scene Manifest setup:

The JSON configuration file is loaded by LaunchGate when check() is called. Using this file you can trigger a few different behaviors in your app.

“What’s with the top-level ios object in the JSON? Why is that necessary?”

The top level "ios" object exists because LaunchGate was created in parallel with Gandalf, its Android counterpart project. As cross-platform mobile developers, we understand how annoying it can be to get two completely separate iOS & Android libraries satisfy the same feature requirements. By developing an LaunchGate (iOS) & Gandalf (Android) together, we are able to provide teams that build & maintained cross-platform apps a solution that should work similarly on both iOS & Android:

By including a requiredUpdate object you can specify a minimum app version and a message that will be displayed to users that have a version that is too old. Users with an older version will be locked out of app until they update.

Scenario: A previous version of your app had a critical bug or security vulnerability that you have patched in the current version of the app, but you still need to prevent users from continuing to use the older compromised version.

In this example, users with a version of the app less than “1.1” will see an alert dialog when the app is opened, with an “Update” button that will take them to the App Store so that they can download the latest version. 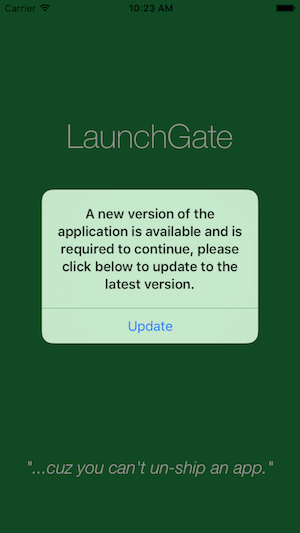 By including an optionalUpdate object you can specify the current version of the app in the App Store and a message to display to the user, possibly to encourage them to update the app.

Optional updates can be dismissed by the user and do not block the user from using the app. Also, an optional update dialog is only showed to the user once per version. That way users aren’t nagged relentlessly every time they open the app.

Scenario: You’ve released a significant update to your app and want to encourage users that do not have automatic updates enabled to upgrade. 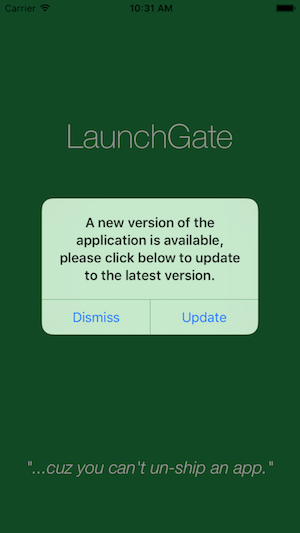 Lastly, besides providing features related to specific app versions and updates, you can also use LaunchGate to display an informative message to your users when they open the app.

A “blocking” alert ("blocking": true) is an alert that is displayed to the user when they open the app but does not give the user any option to proceed into the app.

IMPORTANT → As long as you have blocking set to true users will be prevented from using your app, so make sure to remove or disable the blocking alert as soon as possible.

Scenario: Your app relies on a back-end web service that is temporarily down for maintenance, and you don’t want users of the app to be affected. 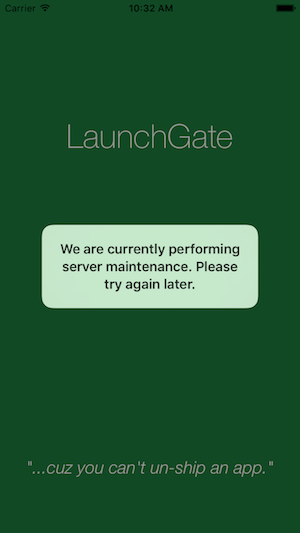 Like the optional update dialog, non-blocking alert messages are only displayed once per message.

Scenario: Your app relies on a back-end web service that is experiencing intermittent connectivity issues and you want to warn users that they the app experience may be degraded. 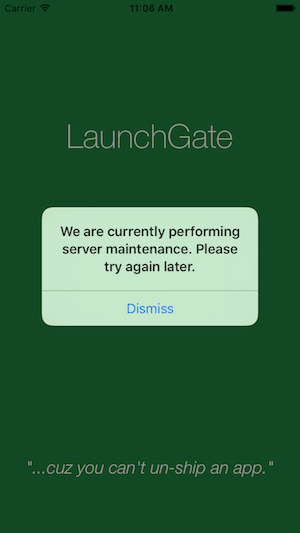 If you need to use something other than the default configuration JSON object, you can write your own parser that conforms to the LaunchGateParser protocol, and set it on the LaunchGate instance before calling check().

LaunchGate is available under the Apache License, Version 2.0. See the LICENSE file for more info.